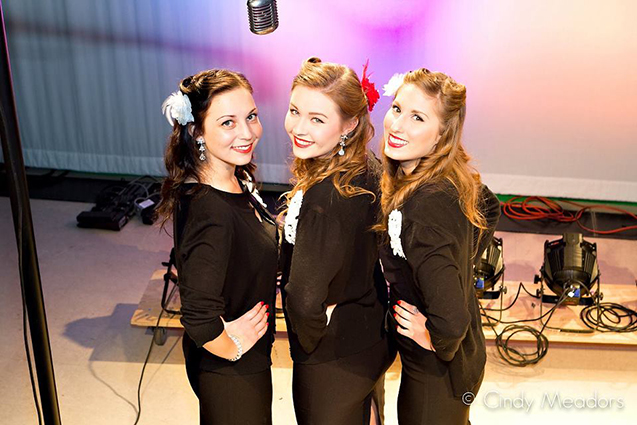 The Swing Kittens are an upbeat swing vocal trio hailing from Orange County, California. Comprised of Nicole Kubis, Kaley Griffith, and Nicole Perreira, The Swing Kittens specialize in tight vocal harmonies and give a youthful spin on heartwarming classics from the ’40s and ’50s. With cheerful choreography and an energetic presence, The Swing Kittens perform favorites by The Andrews Sisters, The McGuire Sisters, and many others from the Golden Era of music.

The Swing Kittens have performed throughout southern California with their partners, the Swing Cats Big Band, in premiere locations such as Disneyland and the Catalina Island Casino. They have been featured artists with the Glenn Miller Orchestra for four years, and have toured with the band in Hawaii, Australia, New Zealand, the Philippines, and Thailand, where they had the honor of performing for the King and Princess of Thailand. The Kittens were featured vocalists for the 2013 Billy Vaughn Orchestra tour of Japan, and were special guests this December with the Würzburg Big Band in Germany.